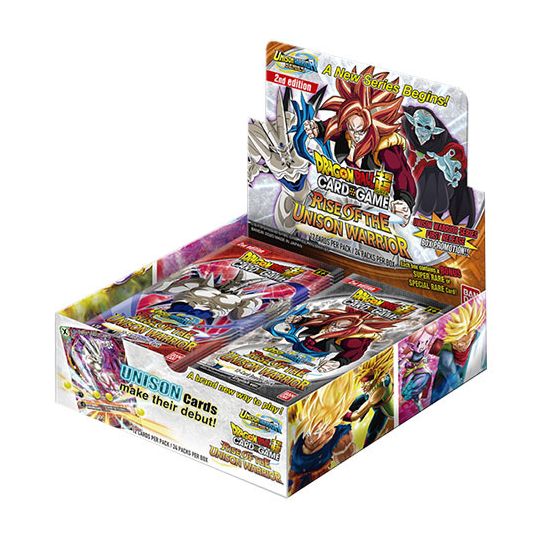 Unison Warriors are powerful allies you can summon to fight alongside your leader, and they've emerged from every dimension!

The Dragon Ball Super Card game enters a whole new Series! The Commemerable Series 10 will be named Unison Warrior Series -Rise of the Unison Warrior and will feature:

Goku & Bardock, Goku & Goku Black and many more!
You can determine the ultimate dream pairing of warriors! Many characters will make their. Dragon Ball Super Card Game debut!

Amazing new strategies will emerge, with Unison Warriors set to power up both new and old leaders! Players will love exploring new combinations and unlocking the full potential power of previously released sets!

Played from the hand like a "second leader card", this card has powerful skills and will be sure to turn the tide of battle! Summon a mighty warrior from another dimension and fight with your two leaders!

SR Card in Every Display Box!
As a promotion for the first Unison Warrior Series, each display box features 1 random SR card from the UW Series!

Specifications Rise of the Unison Warrior Total cards in set: 292
cards per pack: 12